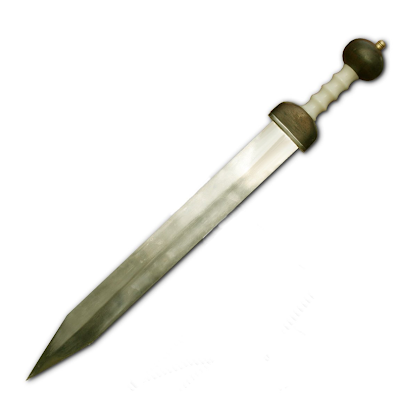 I'm not sure why ancient Roman warriors fascinate me.  Maybe it's just that they were the best military force for over a thousand years!
I'm against violence but there must be a bit of violence in the human genetic makeup.  The evidence is the almost constant state of war we are in, the excitement of battle, movies, video games... All glorify murder!
I took most of the information from various websites but mosly from:
http://www.jaysromanhistory.com/romeweb/romarmy/equip.htm 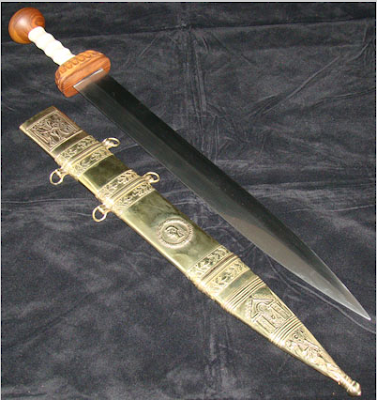 "Roman battle tactics called for close - ordered, disciplined troops fighting as a team as opposed to individual heroics as used by many of their enemies.
Trained soldiers, standing shoulder to shoulder for twenty minutes at a time, methodically killing their opponents.
When an occasional lucky stroke by a barbarian warrior brought down a Roman soldier, another of his brethren immediately stepped forward to fill his spot.
When the twenty minute period of killing was finished, the legionary fell back and rested, to be replaced with a fresh man.


The Roman gladius was 18 to 24 inches in length, double edged, and parallel sided. The last few inches of blade tapered to a point and the grip was terminated on the back side with a large ball shaped pommel.
A short, powerful thrust going a few inches into a man was much more deadly, though less dramatic, than the wide, energy wasting slashes made by an individual warrior showboating in front of his buddies."

Though the primary infantry attack was thrusting at stomach height, they were trained to take any advantage, such as slashing at kneecaps beneath the shield wall.

The next post will be about the Pilum, a special type of throwing spear or javelin.