I Tried the Mirror Hallucination! 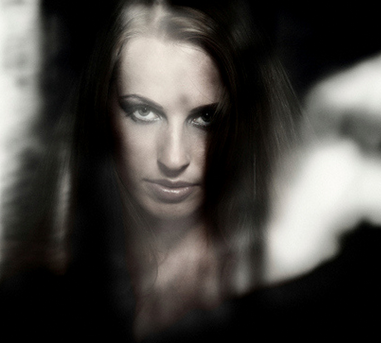 From the Listverse site I read an article about mirrors.

Item 8 claimed that mirrors can cause hallucinations. 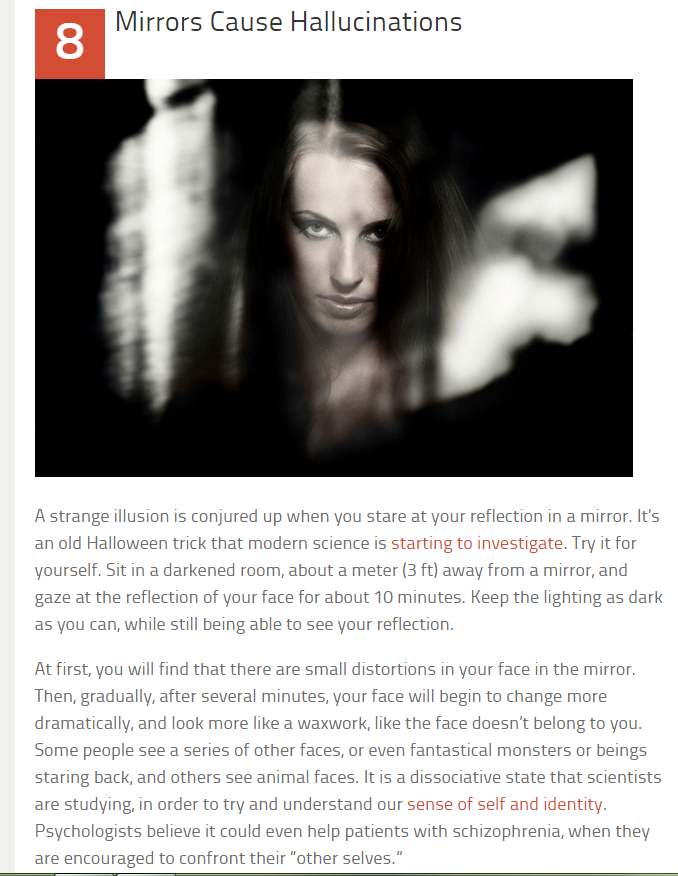 "At the end of a 10 min session of mirror gazing, the participant was asked to write what he or she saw in the mirror. The descriptions differed greatly across individuals and included: (a) huge deformations of one’s own face (reported by 66% of the fifty participants); (b) a parent’s face with traits changed (18%), of whom 8% were still alive and 10% were deceased; (c) an unknown person (28%); (d) an archetypal face, such as that of an old woman, a child, or a portrait of an ancestor (28%); (e) an animal face such as that of a cat, pig, or lion (18%); (f ) fantastical and monstrous beings (48%)."

"More mysterious, however, were the participants’ emotional reactions to the changes:

The participants reported that apparition of new faces in the mirror caused sensations of otherness when the new face appeared to be that of another, unknown person or strange `other’ looking at him/her from within or beyond the mirror. All fifty participants experienced some form of this dissociative identity effect, at least for some apparition of strange faces and often reported strong emotional responses in these instances. For example, some observers felt that the `other’ watched them with an enigmatic expression – situation that they found astonishing. Some participants saw a malign expression on the ‘other’ face and became anxious. Other participants felt that the `other’ was smiling or cheerful, and experienced positive emotions in response. The apparition of deceased parents or of archetypal portraits produced feelings of silent query. Apparition of monstrous beings produced fear or disturbance. Dynamic deformations of new faces (like pulsations or shrinking, smiling or grinding) produced an overall sense of inquietude for things out of control."

To trigger the illusion you need to stare at your own reflection in a dimly lit room. The author, Italian psychologist Giovanni Caputo, describes his set up which seems to reliably trigger the illusion: you need a room lit only by a dim lamp (he suggests a 25W bulb) that is placed behind the sitter, while the participant stares into a large mirror placed about 40 cm in front.
The participant just has to gaze at his or her reflected face within the mirror and usually “after less than a minute, the observer began to perceive the strange-face illusion”.

The first time:
I saw my cheeks puff up as if I were filling them with my breath.  Then I saw my face disappear as if it was invisible.  My shoulders and chest were visible but it seemed I could look through where my face was supposed to be and into the dark room.
But I still was not sure if this was due to my eyes adjusting to the dark or if it was a true hallucination.

The next time I tried it:
Besides my head becoming invisible then coming back into view; the reflection's eyes moved on their own.  I looked directly into the reflection of my eyes and they moved away then stared back at me.  I knew it was only an illusion so I was not afraid.  My nose became slightly rubbery.

To summarize:
I think I experienced some mild hallucinations.  It was not only my eyes becoming adjusted to the dark.
1. My head became invisible then came back.
2. My cheeks puffed out slightly for a moment.
3. My nose became briefly rubbery.
4. This is the strangest hallucination of all.  The reflection of my eyes moved on their own as if it was another person looking back.

I'm not sure what all this means, maybe nothing.