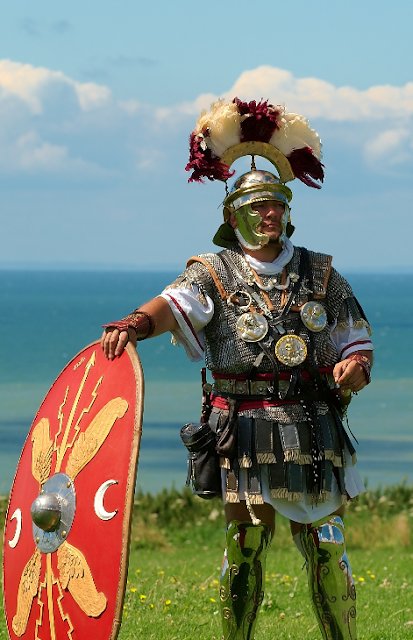 I came across this photo of an historic reenactment.  Somehow it made me very excited.
I felt like a boy again playing with toy soldiers.
(Click on photo to enlarge it then use the "back" button to return to my blog.)
Here are the details:
Centurion - (ancient Rome) the leader of 100 soldiers.
[from Latin centuri, centurin-, from centuria, group of a hundred; see century.]


Qualities necessary for the centurion:
1. Centurions had to be literate.
2. Have connections (letters of recommendation).
3. Be at least 30 years of age.
4. Had already served a few years in the military.

The centurion in the infantry is chosen for:
-his size, strength and dexterity in throwing his missile weapons and for his skill in the use of his sword and shield; in short for his expertness in all the exercises.


He is to be vigilant, temperate, active and readier to execute the orders he receives than to --talk --


Strict in exercising and keeping up proper discipline among his soldiers
in obliging them to appear clean and well-dressed
and to have their arms constantly rubbed and bright.

I think the uniform is really neat !
I wonder what they used the headdress for?
I bet they used it to clean off the shield and armour (only kidding).

One way to use their sheilds:
The photo below shows three sheilds lined up.  There are 3 soldiers behind them. 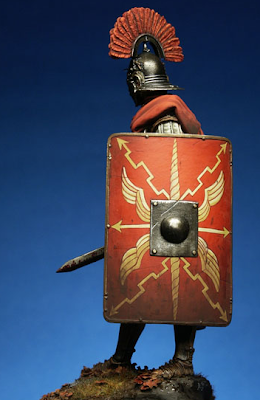 (Latin: the Senate and the People of Rome)