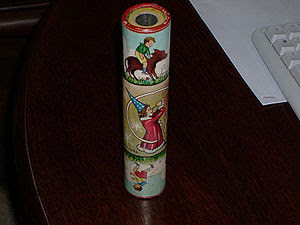 A toy consisting of a tube containing mirrors and pieces of colored glass or paper, whose reflections produce changing patterns that are visible through an eyehole when the tube is rotated.

Image via Wikipedia
I remember having these as a child.  It was fascinating and magical for me.
Try this link.  The images move quickly so be prepared.  If you move your mouse it changes even faster!

I found this on the"Aging Gratefully" blog
http://aginggratefully.blogspot.com/2011/07/no-thought-thursday.html
at Sunday, July 31, 2011 No comments:

Here is a site I found with unbelievably expensive pens. You have to have a look.
Who can be rich enough to buy one of these pens?  If I was that rich I'd donate my money to help build something useful like a hospital wing.
But the ad photos and narrative are fun to watch!
Click on the "Historical" pens like:
The Houdini has a melt of silver and metal from his keys.
The Babe Ruth which has part of one of his bats.
The Lindbergh pen cap has a piece of the motor from The Spirit of St.Louis.
There are no prices listed.  I guess if you have to ask for the price you can't afford the pen.
What a waste of money.
Here is the link

Guns: Self Preservation or Self Destruction? 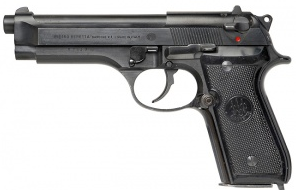 
For some unknown reason a fantasy about the "Wild West" combined with feelings from The Godfather movies overtook me.  Here are two photos I found which fit in well with this feeling.

The Brothers "M": Antonio and Giovanni came from Italy to the Wild West.
Armed with their Italian super fast and powerful Berettas, they were no match for anyone who crossed their path.

I then did some research on the Italian Beretta handgun:
This was the gun used by the SEALS in the recent attack on bin Laden.
This is the gun used by James Bond in the 007 movies.
In April of 1985, the Beretta Model 92 beat out the Colt .45 to become the U.S Armed Forces chosen handgun.
There is a legend about a SEAL motto:
"You're not a SEAL until you taste Italian steel," referring to the Beretta brand's Italian heritage.
History:
Beretta (Owned by the same family for over 500 years)
16th Century Origins
The home of Fabbrica D'Armi Pietro Beretta S.p.A. is the village of Gardone, in the center of the northern Italian valley known as Val Trompia. Iron ore in the hills of northern Italy made the area an iron-working center from the Middle Ages.
Bartolomeo Beretta was born in 1490. The earliest documentary evidence of his forge is a contract from the Doges of Venice, dated October 3, 1526.

Then I found two videos that continued my intoxication:


The second video demonstrates how even an out of shape person can use the gun's lethal power:


This post serves as an example of the intoxicating effects of testosterone.  I'm a quiet peaceful man yet I can understand how at times it surpasses the sexual urge and even the need to eat.

I believe this instinct for self preservation can have the opposite effect of self destruction for the individual and possibly for the entire human race.

Too bad violence is so glorified in the popular media.

Here is a a link to a short video about reality and spirituality. It got me to thinking about what's really important.

The music is soothing and the visual interesting.

Let me know what you think.