Absinthe and the Green Fairy 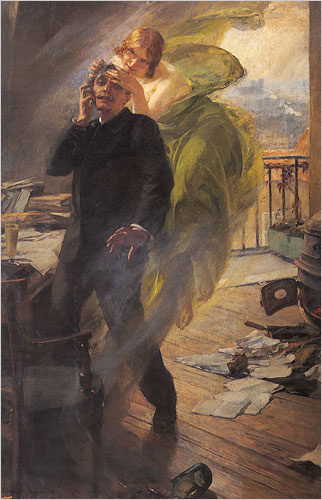 I don't drink alcohol because according to my doctor it may induce a seizure. Several years ago I had a major seizure while I was asleep. I was rushed to the hospital and started on medication.  After several minor blanking out episodes my medications were adjusted.  Now I'm OK.
Sometimes I wonder if I should try a small drink.  Now I drink alcohol-free beer. I like O'Doul's with the green label. I've had one small glass of sangria without any problem.

I saw a documentary on Netflix about the history of absinthe.  I didn't know the drink was banned until about 2008!


"A potent green aniseed-flavored liqueur
that turns milky when water is added.
Prepared from wormwood,
it is now largely banned because of its toxicity."

It's a very strange drink. I'm sure the combination of herbs has something to do with its effects. It can't just be the alcohol!

Here is a short history (much shorter than the one you can find on Netflix):

Below is a video demonstrating the ceremony involved when drinking absinthe:

The debate over whether absinthe produces effects on the human mind in addition to those of alcohol has not been conclusively resolved.
...some of the herbal compounds in the drink act as stimulants, while others act as sedatives, creating an overall lucid effect of awakening.

The effects of absinthe have been described by some as mind opening. The most commonly reported experience is a 'clear-headed' feeling of inebriation — a form of 'lucid drunkenness'.

In the year 2007, almost 100 years after absinthe prohibition, the alcoholic spirit absinthe was once again legalized, but only those Absinthes, which contain less than 10mg of thujone.In the European union 35mg are legal
(Plants with high concentrations of thujone include white cedar, tansy, wormwood, and sage. Thujone is believed to be toxic to the brain and nervous system. It is likely to cause seizures when consumed in quantity or consumed regularly over a period of time. ...)

I wonder if a non-alcoholic version can be made, maybe from a combination of teas.