I enjoyed watching the movie Red Lights a few days ago.
After hearing Simon Silver played by Robert De Niro say:
"We called Ptolemy insane, we spat in the face of Galileo, we burned Giordano Bruno... What did we need? What do we need in order to learn?"

I decided to do some research on Giordano Bruno, the less famous of the three.
Bruno believed that the stars in the sky were really other suns with their own planets.
He said that support for such beliefs in no way contradicted scripture or true religion.

From Wikipedia:
"Giordano Bruno lived 1548 – February 17, 1600. was an Italian Dominican friar, philosopher, mathematician and astronomer.
His cosmological theories went beyond the Copernican model in proposing that the Sun was essentially a star, and moreover, that the universe contained an infinite number of inhabited worlds populated by other intelligent beings.
(My highlights) 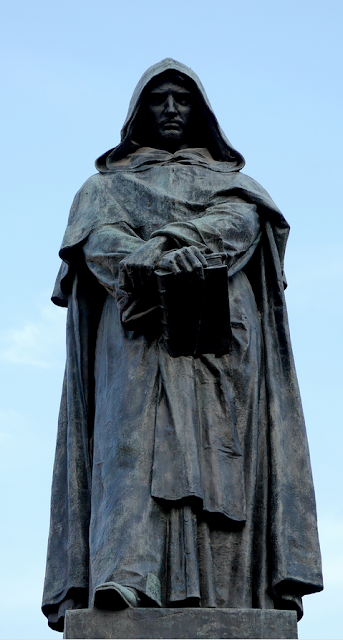 After the Roman Inquisition found him guilty of heresy, he was burned at the stake.
After his death he gained considerable fame, particularly among 19th- and early 20th-century commentators who, focusing on his astronomical beliefs, regarded him as a martyr for free thought and modern scientific ideas." From Wikipedia.

I enjoy reading your comments. Even if I don't always reply
I'll visit your blog.